1) Como hoje é 4 de julho, vamos botar a namoradinha da América para cantar ''You taste like the fourth of julyyyyy / Malt liquor on your breath, my, my/ I love you but I don't know why'', da absurda música ''You Can Be the Boss'', que nem entrou no álbum campeão dela.

6/30/2011 – UK-based Stranger Records, a label founded at least in part by New York-based global consultant Peter Jenkins, releases an announcement that they have signed LDR. At this time, Stranger has only one other piece of news on their website, dated 3 days prior. They encourage visitors to their website to check out LDR’s video for her single, “Video Games.” The video is taken down shortly thereafter.

7/15/2011 – MTV Style blog assumes an emphatic pro-Del Rey posture, articulated in the unforgettable words, “ZOMG she is so important.” 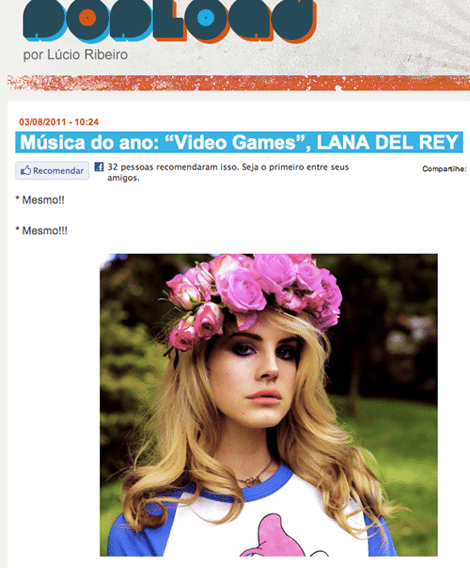 8/19/2011 – Lana Del Rey uploads video for “Video Games” to her YouTube channel. Many YouTube commenters insist the original video was better (scroll to “10 months ago”).

9/9/2011 – Video for “Blue Jeans” hits the Internet. The Huffington Post favorably claims that the video is added evidence to LDR “making a good case to be our next deep-voiced, soul darling.” The Huffington Post commenters say that she doesn’t hold a candle to Amy Winehouse, Adele, Rebecca Black, though some of them like her voice and the song. Much attention is paid to her lips.

9/14/2011 – LDR plays secret show in Brooklyn as the “Queen of Coney Island” in preparation for upcoming sold-out tour dates. Brooklyn Vegan included a critique of Lana Del Rey by Amy Klein of Titus Andronicus in their reporting on the event, quoting Klein as saying that Del Rey (and America) is “narcissistic and self-obsessed.” BV commenters mostly used their commenting oxygen to trash Klein. The original critique has since been removed from Amy Klein’s blog.

12/19/2011 – The Guardian publishes “The Best Song of 2011? It had to be by Lana Del Rey,” providing a trenchant defense and prosecution of “Video Games” and LDR’s unlikely trajectory. Guardian commenters are similarly ambivalent.

1/4/2012 – LDR signs modeling contract with Next Model Management. Even this news triggers the standard ambivalence in response. Comments from the Telegraph‘s fashion blog include: “She’s so gorgeous, I’m not surprised,” “She’ll be dropped just as quickly…” and “hmm.”

1/14/2012 – LDR appears on Saturday Night Live, gives roughly same performance as she had on Jools Holland in October. This time, it is deemed a catastrophe of earth-shattering proportions, moving a gob-smacked media complex to pandemonium. She captures the imaginations of Juliette Lewis, who (in a since-deleted tweet) likened her performance to that of a “12-year-old in their bedroom… pretending to sing and perform.” Eliza Dushku also calls her a “wack-a-doodle” based on this performance.

1/31/2012 – Born To Die LP released, after having received a review of “bad … really bad” from Stereogum and a 5.5/10 review from Pitchfork, Spin is only slightly more generous, giving it a 6 out of 10 rating and saying that “This record is not godawful. Nor is it great. But it’s better than we deserve.” Meanwhile, over in the UK, The Guardian gives it 4 out of 5 stars.

2/4/2012 – Shape-shifting chanteuse Liz Phair defends LDR in the Wall Street Journal, saying “Lana Del Rey is exactly what I was hoping to inspire when I took on the male rock establishment almost twenty years ago with my debut record, Exile In Guyville.”

2/8/2012 – In an article called “Lana Del Rey, Internet Meme” The Atlantic calls her “the digital version of the electrified Dylan.”

4/2/2012 – The announcement is made that A$AP Rocky and LDR are working together. Their first collaboration is to be featured on the KickDrums’ Follow The Leader mixtape.

4/3/2012 – Follow The Leader is released without “Ridin,’” LDR and A$AP Rocky’s track. The Kickdrums tweet that the track got “too big too fast” and that A$AP wants the track for his own record. The song ultimately gets released on June 28, 2012.

4/6/2012 – Del Rey is seen exiting Chateau Marmont with Axl Rose. The Blogosphere is agog with rumors of their potential romance.

5/14/2012 – A Del Rey inspired handbag is released by Mulberry. Priced to move at $1250, Rolling Stone ranks it “among our favorite new ladylike accessories for spring.”

5/29/2012 – An instrumental version of “Blue Jeans” is licensed in a luxurious-looking ad for Nespresso.

6/3/2012 – Del Rey performs at L.A.’s El Ray theatre and debuts a brand new song, “Body Electric,” which is apiece with her other bummer jams. Rolling Stone commenters either love it (“She was absolutely incredible during this show!”) or hate it (“Just horrible. Simplistic, emotions less, [sic] forgettable.”). 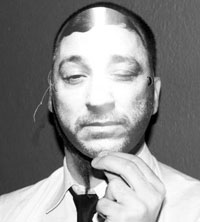